Sweeney Todd on the Main Stage

On the Main Stage this Summer!  Free and Outdoors at the Old Stone House & Washington Park*, 3rd Street between 4th & 5th Avenues, Park Slope, Brooklyn, NY. Bring a picnic blanket, rent one of our chairs, and visit our concession stand for food, beer, wine and soft drinks. Don’t forget to try our yummy meat pies made especially with Sweeney Todd in mind! 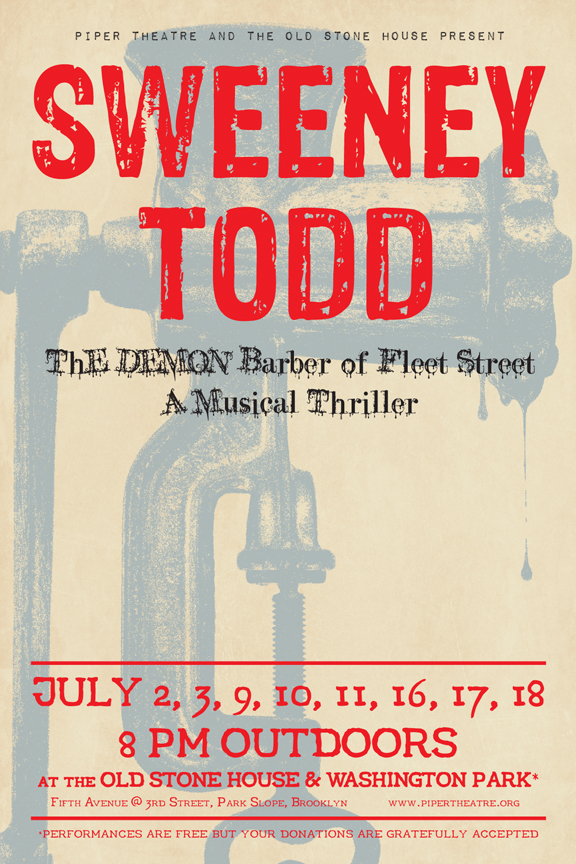 Set in 19th century England, Sweeney Todd is an unjustly exiled barber who returns to London with a new name seeking vengeance against the lecherous judge who framed him, ravaged his young wife and became warden to his daughter. The road to revenge leads Todd to Mrs. Lovett, a resourceful proprietress of a failing pie shop, above which he opens a new barber practice. Mrs. Lovett’s luck sharply shifts when Todd helps her integrate an ingredient into her meat pies that has the people of London lining up to indulge themselves.  Todd’s revenge leads him tragically back to his wife and daughter and as he delivers justice to his enemies, he brings about his own bloody end.